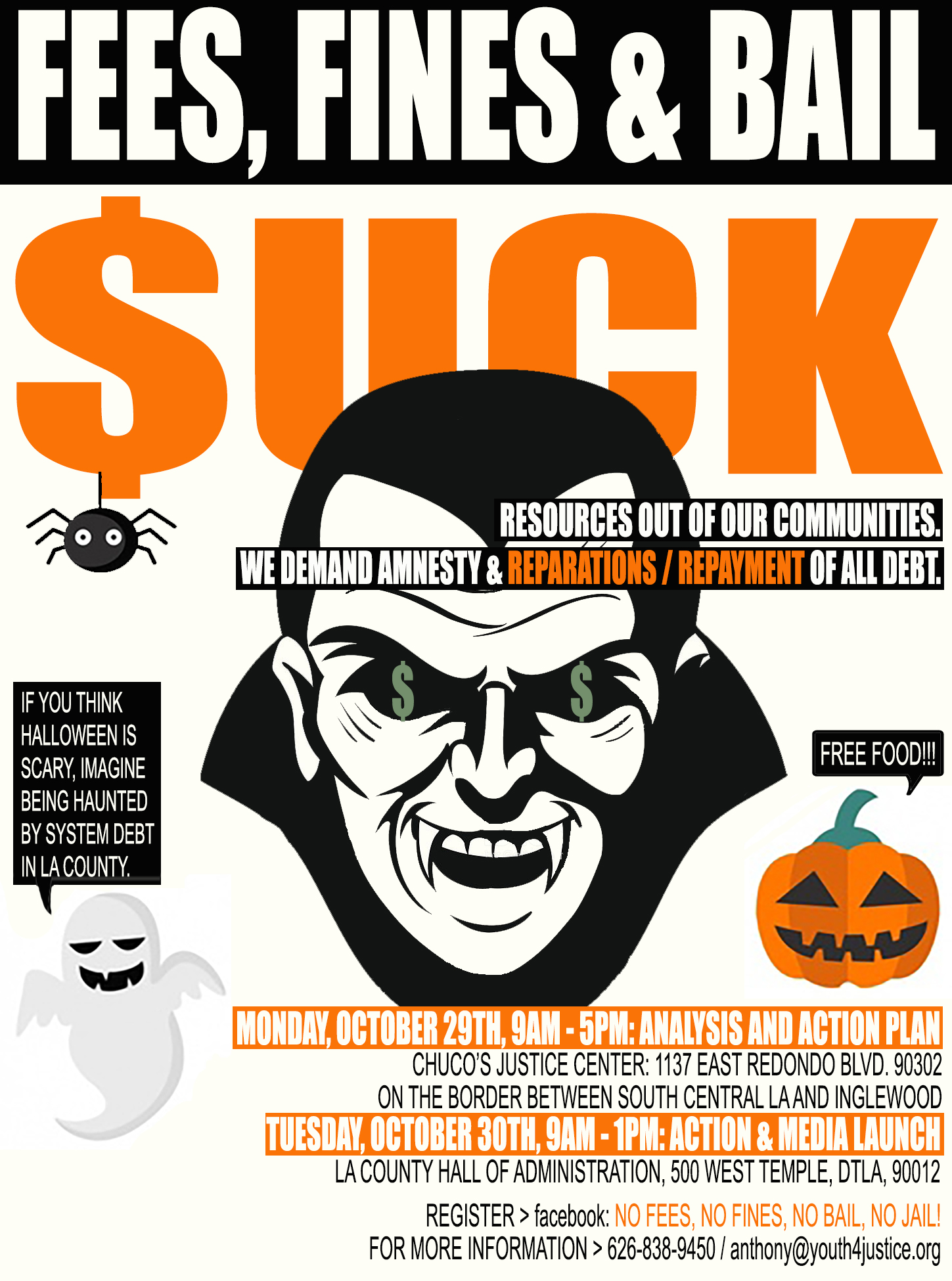 Flier for the LA-area event demanding amnesty for all fines and fees debtors.

At arrest you pay a booking fee. At arraignment you might contract with a bail bonds company and pay both an unrefundable bond and set up a payment plan for the balance on your bail. If you’re out on bail you pay your own electronic monitoring fees. For trial you pay a public defender registration fee, pre-trial investigation report fees and representation by counsel fees. Diverted from jail? Pay diversion program fees or work program fees. On home detention? Pay home detention fees. But what if you’re convicted? Then pay fines (to “punish and deter” you from further crime) and restitution (to compensate victims for personal or financial loss.) During incarceration and probation other fees include supervision fees, electronic monitoring fees, drug and alcohol testing fees, community service fees, civil assessment fees, penalty assessments, surcharges. And what if you can’t afford all this? Set up a payment plan! That plan comes with its own collection fees, returned check fees, and more.

If you can’t make these payments, not only can you be subject to rearrest, but you might also be cut off of public benefits. Because the “failure” to pay court debt is a violation of parole or probation, individuals who can’t afford to pay may be cut off from benefits such as TANF, food stamps, housing assistance, and Supplemental Security Income for seniors and people with disabilities.

According to a recently filed class-action lawsuit, the city of Ferguson, Missouri—a crucible of the Black Lives Matter movement, where Michael Brown was shot and killed—runs a modern debtors’ prison scheme in which impoverished people are routinely jailed because they are unable to pay these debts. The lawsuit details how Ferguson families use money needed for food, clothing, rent, and utilities to pay ever-increasing court fines, fees, costs, and surcharges. When they can’t pay, they’re imprisoned. In 2014, Ferguson made 21 percent of its municipal budget off of fines and fees. Across the United States, debt, (along with outright state terror,) often acts as a fearsome mechanism of racist social control.

But there is power and possibility here, not only poverty and prison. Thanks to activists and organizers, San Francisco recently abolished a group of fines and fees and will no longer collect from people who owed those fees before the new law went into effect. California recently ended money bail (in a deeply flawed bill that replaces the exploitative bail bonds industry with racist risk assessment algorithms.)

Riding this momentum, the Debt Collective is working with Youth Justice Coalition, Homeboy Industries, and others in a statewide activist coalition to end all court and incarceration debts. We are also working with the fabulous Danica Rodarmel (http://www.equaljusticeworks.org/node/90574) to add a bail debt dispute tool to our platform. Like our others tools, this tool will allow people with outstanding bail debt to legally contest it.

Debt contracts in the court and incarceration system are unconscionable. Like so many other forms of debt, they disproportionately exploit Latinx and Black communities, and extract resources from already poor neighborhoods and families. The Debt Collective is joining the movement to abolish these debts in the short term, as we work toward a world without prisons in the long term. 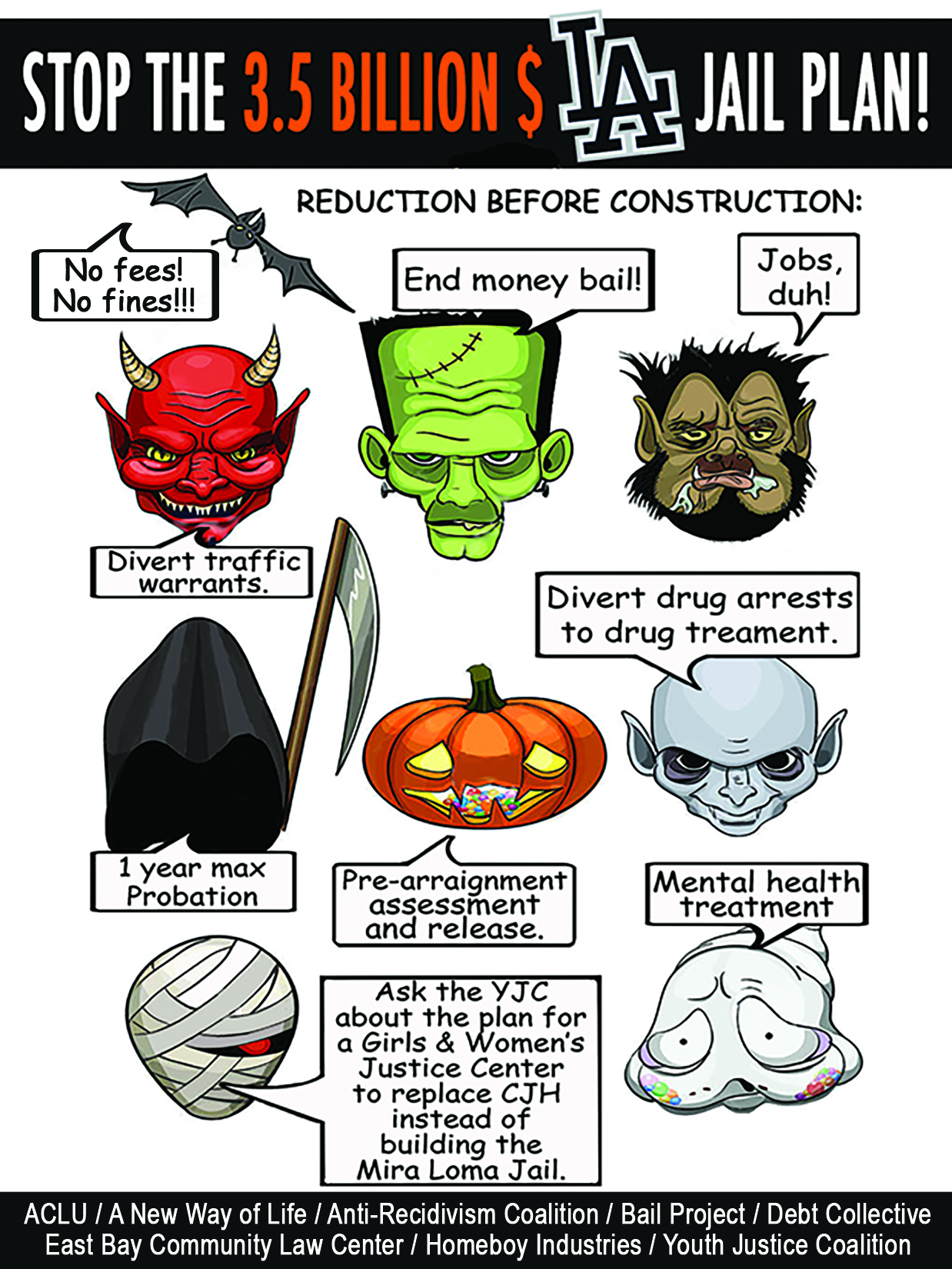 A flier for the campaign launch event.