On October 29th and 30th the Debt Collective partnered with activist groups in Los Angeles including Youth Justice Coalition, All of Us or None, Homeboy Industries, A New Way of Life Reentry Project, Community Coalition and more to launch a statewide campaign to eliminate fines, fees and bail in California.

Why Fight Back Against Court Debt and Bail?

People exiting the criminal justice system are often charged thousands of dollars in administrative fees which are really just predatory debts. The goal of such fees is to raise revenue, not to punish, since people have already served time, paid fines, or faced other consequences. But the vast majority of those who incur these debts can’t afford to pay them.

Many people can’t get their records cleared or access stable jobs and housing until this debt is paid, which can take years. Court debt, or what we prefer to call human caging system debt, drives whole families to spend years trying to dig themselves out from under mountains of bills.

These fees shackle people with debt well after they’ve served their time. They should be eliminated across the board.

What Happened at the Event

With rallying cries of 'Freedom Should Be Free' and 'Debt Free Justice,' the event was held at Chuco’s Justice Center in Inglewood, CA. Most organizers and participants--young and old--were people whose lives have been deeply affected by the human caging system and who are now dealing with often insurmountable debts.

Young people shared stories of their parents being charged thousands of dollars for mandated ankle bracelets and community service (yes, paying for community service). Most families did not have thousands of dollars available. They often borrowed money in an effort to pay or continued to endure ongoing harassment by the courts in the form of fines and fees as well as late fees and penalties.

Artwork at the launch event.

Stories of Unjust Debts and the Criminalization of Poverty

One young woman’s mother was sick when her daughter got in trouble with the system. She simply could not afford her own medical care and her daughter’s fines and fees at the same time. Another man who had been incarcerated for fifteen years recounted that his fines and fees while inside caused his mother to lose their family home. Still others told stories about how the system steals both freedom and money from impoverished, mostly black and brown communities: people are paying fees and fines not only to the court system (the state) but also to immigrant detention facilities (usually privately run, for-profit companies).

Everyone explained how they experienced the criminalization of poverty: when you get out, you have debt and you can’t get a job because no one will hire people just getting out of jail. Often your driver license is also suspended. Many people talked about feeling like the fines and fees and their inability to get jobs together pushed them back to the streets to find money by any means necessary. 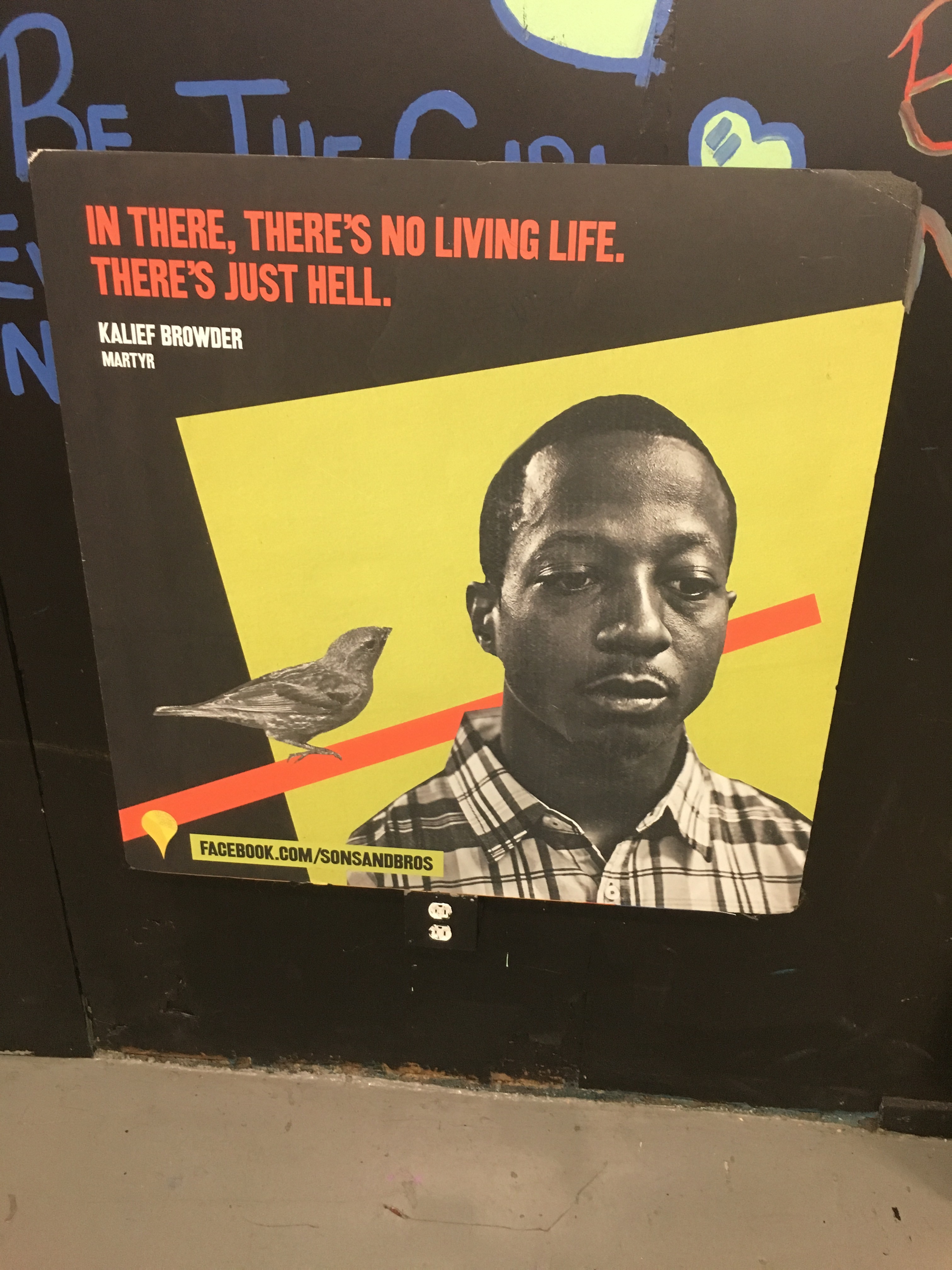 A memorial to Kalief Browder who committed suicide after being incarcerated.

All those targeted by the human caging system described wanting to make a life with little support. Many were dealing with the shame and anger that comes from struggling with multiple kinds of debt, including medical debt, housing debt, predatory payday loans, subprime auto loans and defaulted credit card debt.

Debt Collective even met one woman who went to for-profit Everest College which, as our members know, had a long history of scamming students. This former Corinthian had yet to learn about Defense To Repayment, the law that says you have a right to debt relief if your school defrauded you. Debt Collective organizers shared that information to get her on the path to disputing her federal student loans.

The Los Angeles convening featured a “living library” where people shared stories of how human caging system debt had impacted them and their families, panel discussions on bail debt and fines and fees, and a participatory activity around jail abolition vs. jail reform. During this part of the event the Debt Collective and several pro bono lawyers worked with individuals to help them join our new online platform and begin the process of disputing their bail debts and all the other debts that make their lives impossible to live.

The day ended with action planning for a press conference the next day as well as a public comment period at the LA Board of Supervisors meeting. 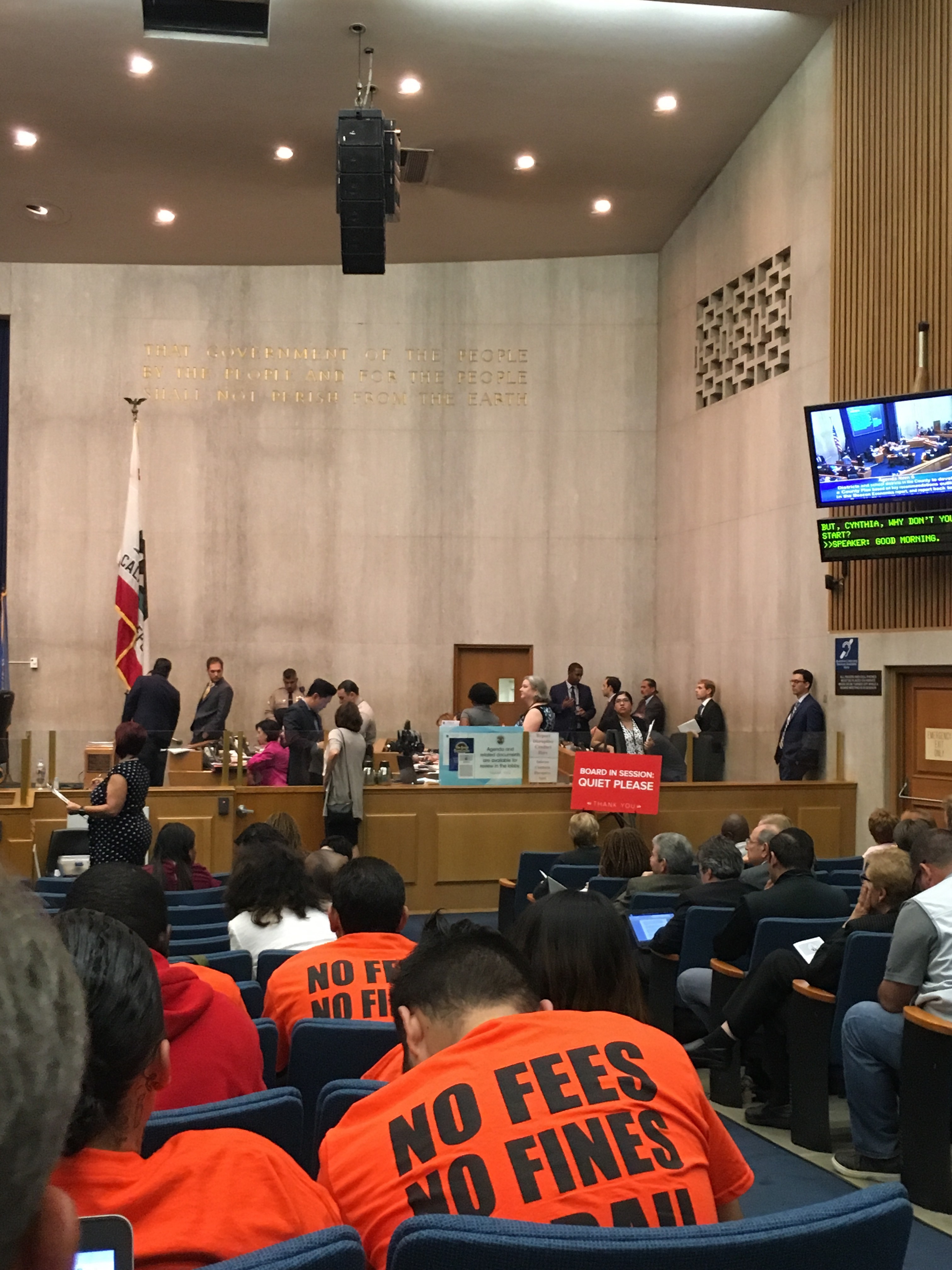 People affected by the human caging system attend a Board of Supervisors meeting.

At the meeting both young people and adults testified to the board of supervisors on how their families had to choose between medical care, a roof over their heads or human caging system debt. One person testified that getting already-poor people to pay these debts was like “squeezing blood from a turnip.”

The campaign for abolishing fines and fees and bail in California continues. We know we can win state-wide elimination of fines and fees because, in 2018, San Francisco became the first place in the country to completely eliminate these debts. By working with our allies, we can end fines and fees across the state - and more.