On Wednesday students who attended predatory for-profit college, the New England Institute of Art, stormed their former campus to demand justice, including debt cancellation, for all those who attended the school.

Winnie explained why she attended the action. "This action was a very long awaited and exciting day for both students and parents, past and present, who fell victim to New England Institute of Art’s unfair and deceptive practices. This college closing should have happened a long time ago! What they have done is nothing less than shameful."

The college, which is owned by Education Management Corporation, has already announced that it plans to close, leaving thousands of students with worthless degrees. The campus is trying to shut down slowly so that currently enrolled students graduate or transfer, leaving them ineligible for student debt relief.

The former students, who are calling themselves the NEIA Collective, delivered a warning to the college's President, John Lay. They told him that the school and its parent company are about to be sued for lying to students and defrauding them. This was the first of many actions that Debt Collective members are planning. 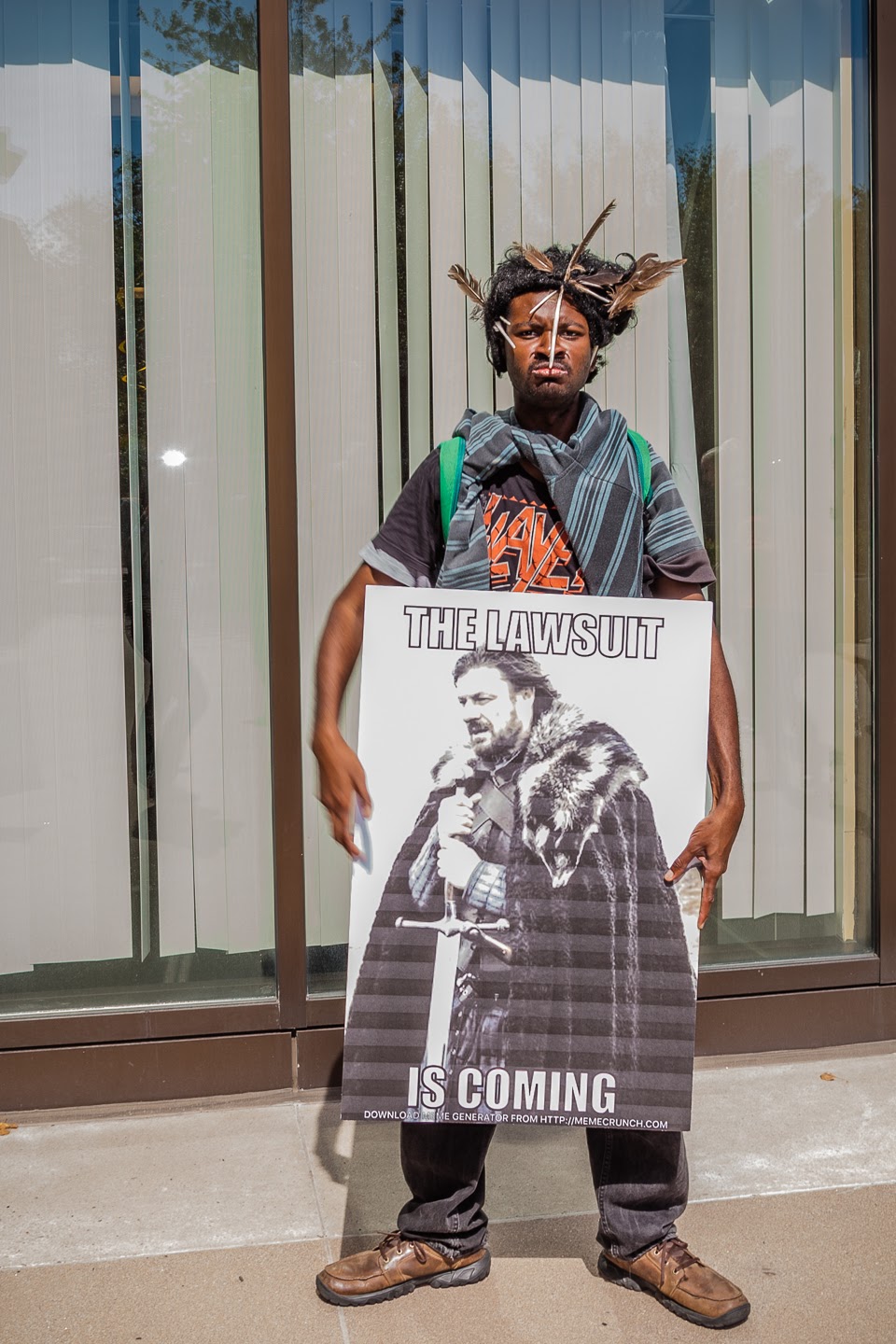 Mr. Lay defended the school, which has been under investigation and sued by state and federal authorities for years. “I think we’ve done a pretty good job….I’ve always felt good about what I do,” Lay told the protesters. “Overall, I feel good about the school." 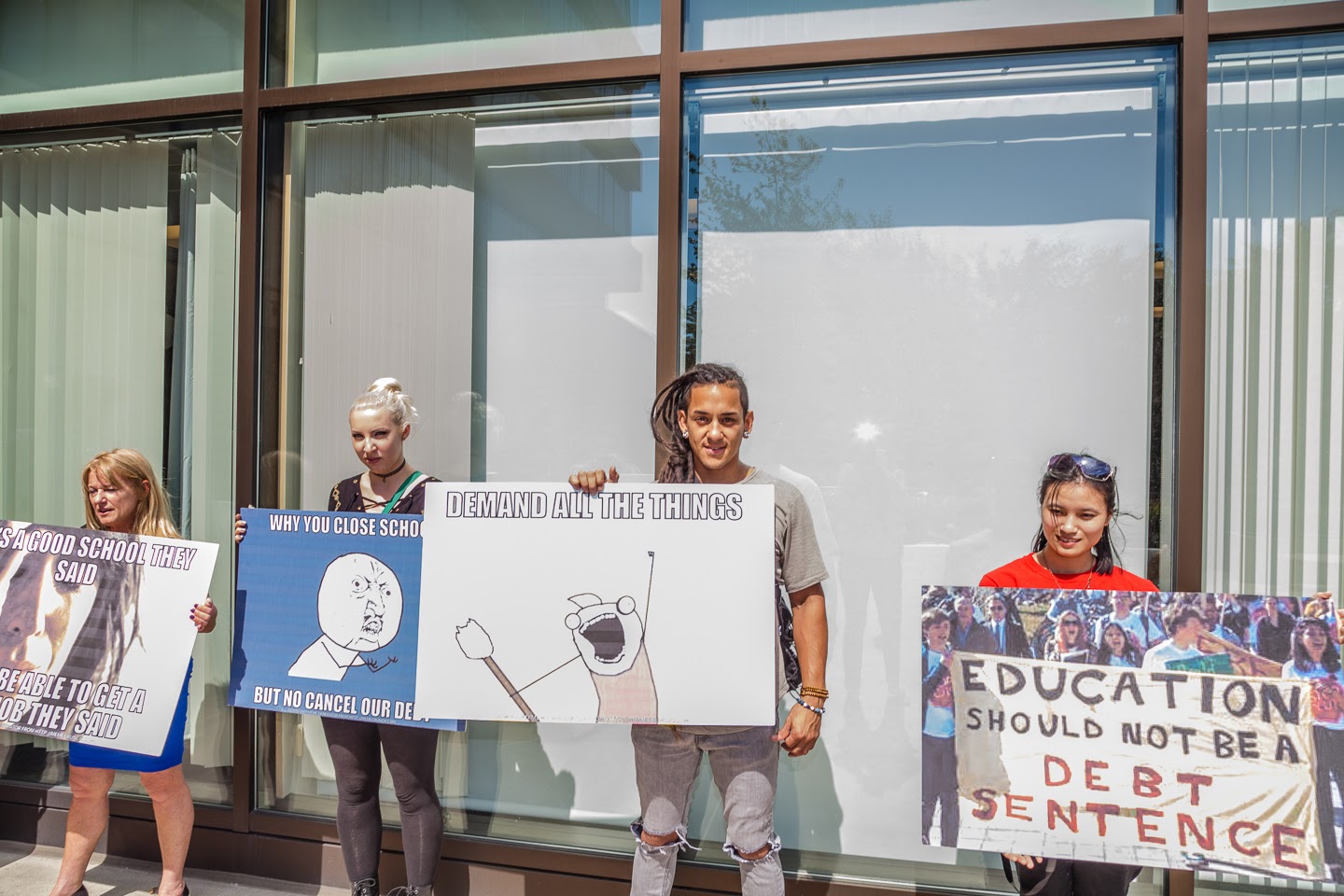 After listening to Mr. Lay defend the school that scammed them, the students put him on notice by handing him a demand letter from attorneys at the Legal Services Center at Harvard. "NEIA deliberately targeted its predatory educational product and associated unmanageable debt to individuals from precarious and unprivileged socioeconomic backgrounds," the letter reads.

The letter lists the following demands:

REMEDY the harm that you have caused to us, our families, and the public. Cancel all of our debts. Repay the money that we borrowed to attend your school. Remove bad reports from our credit histories. Compensate us for the time and resources that we squandered.

STOP enrolling new students in any of your schools, and shut down entirely. Immediately. Stop denying your wrongdoing. Stop using unfair and oppressive arbitration agreements to hide your fraud and prevent us from acting together. Stop retaliating against employees and former employees who speak out to expose your abuse.

ADMIT to us and our families, to the public, and to those who control our debts, that because of your illegal conduct, our debts are invalid and unenforceable. You lied to us and to those who are supposed to regulate and oversee you. You falsely advertised your school. You used manipulative and deceptive tactics to enroll us, even though you knew that our student loan debt would be unmanageable. You knew that employers do not respect the name or training of Art Institute students. You knew that we would not be able to succeed.

EXPLAIN to us and our families, to the public, and those who control our debts, where all of the money that we paid you, through our debts, has gone. Who got rich from our debts? Who owns you now? Who made the decision to close down NEIA and other Art Institutes/EDMC schools, and why?

ACKNOWLEDGE to us and our families, to the public, and to those who control our debts, that you targeted us for enrollment in your programs because you believed you could take advantage of us for your own financial gain. You perceived that your power was greater than ours, knowing as you did that we do not come from rich and powerful families. You used aggressive, manipulative, and deceptive tactics to recruit us and convince us to enroll in your expensive and worthless programs. We worked hard and sacrificed. All the while, corporate profits were more important to you than any of us. You treated us like numbers. You have harmed us all.

For more information and to learn what the lawsuit against EDMC means for all AI students, read our FAQ.

The Debt Collective is here to support ALL student debtors in their fight for justice. We <3 the NEIA Collective. 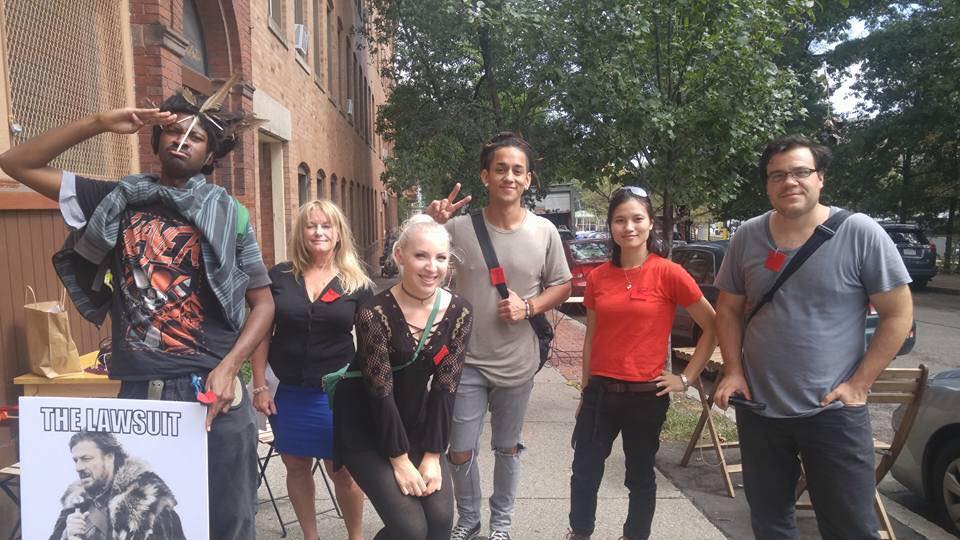