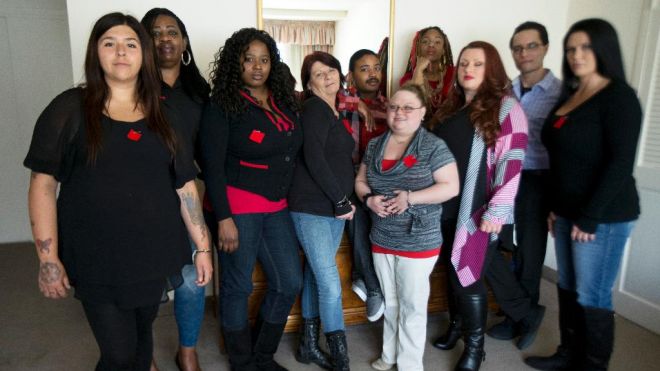 Yesterday we announced that the Corinthian 15, the first student debt strikers in US history, had become the Corinthian 100. The strike is growing as more and more people are acknowledging the legitimacy of the claims being made by students who say their degrees are fraudulent and their debts should be cancelled.

The strikers described how Corinthian had lied to and misled them with false promises of job placement and high-paying careers. Striker Natasha Hornes asked DOE Undersecretary Ted Mitchell why “Corinthian is allowed to get out of its financial obligations but students aren’t.” Strikers went on to demand that the Department cancel their loans and the loans of all other Corinthian students.

Mitchell said that he recognized that the students’ claims were serious and that the Department was working on a plan to address students’ concerns. The strikers immediately reminded him that the DOE had been investigating Corinthian for years before the company collapsed in 2014. “How long does it take to figure out they’ve done something wrong?” asked striker Jessica King. Mitchell offered no response to this question.

Other strikers began loudly and forcefully declaring that the Department has the full legal authority to cancel student debt, and yet the agency has so far refused to take action. For many strikers, the stakes are high. Pamela Hunt described how she and her six children might soon be homeless due to the impact of student debt on her credit score. Striker Ann Bowers told Mitchell that she “might have to take my dog and go live in a box on the street” if the Department failed to take swift and dramatic action to cancel Corinthian students’ debt.

The meeting was also an opportunity for Debt Collective organizers and strikers to present hundreds of Defense to Repayment applications to the Department. In fact, one of the first words out of Undersecretary Ted Mitchell’s mouth was that he was looking forward to seeing the Defense to Repayment applications we had brought with us. Throughout the meeting, the forms were in a red box under the table.

Finally, with five minutes left until the scheduled end of the meeting, Debt Collective organizer Luke Herrine took out the box and slammed it onto the table. Luke told Mitchell that there were 257 Defense to Repayment Defense to Repayment applications for him to review and well over 100 more waiting to be printed out and delivered. After reminding him that by creating these forms, encouraging Corinthian students to fill them out, and turning them in, the Corinthian Collective was doing his job for him, organizers explained that they didn’t think Mitchell should look at them at all.

As it currently is, Defense to Repayment requires the DOE to review every form individually. But the agency already knows about Corinthian’s systematic abuses--Mitchell had even admitted to that in the meeting! So strikers argued that he should use his broader power to discharge many loans all at once to erase all past and present Corinthian students’ debts immediately.

Many strikers reminded Mitchell that this discharge is by now well overdue. But they pointed out that cancelling their debts alone would not be enough. Even if the Department were to erase all Corinthians students’ loans, the agency would still have the obligation to set up a fair and transparent means to erase the debt of other students facing similar circumstances.

Mitchell acknowledged that strikers' proposals were reasonable and said that the Department had already begun considering some of them. When strikers demanded to know when he would follow up, he told them that he would get back to them within 30 days, inviting them to meet with him again in person. In doing so, Mitchell met at least one of the strikers’ demands: to include the Debt Collective and Corinthian students in the decision-making process going forward. Led by the strike team, Corinthian students are now one step closer to declaring victory.